The Destination Restaurant of the year 2022

Villa Aida, winner of the Destination Restaurant of the Year 2022 award, is located in Wakayama Prefecture, half an hour by car from Kansai International Airport or a train ride with several transfers from Osaka. It isn’t surrounded by great scenic beauty or near any famous sites. Instead, it is tucked among clothing shops and restaurants on the main drag of a residential neighborhood that few travelers would likely go out of their way to visit unless they were headed for this restaurant. Since there are no luxury hotels nearby, most diners finish their meal and head straight back to the airport or train station. But if they arrive an hour or so early, they can tour the gardens where chef and owner Kanji Kobayashi lovingly grows the vegetables for the restaurant. The place where the zucchini and corn ripen. The greenhouse crowded with colorful edible flowers and herbs like thyme and rosemary. They may find chef Kobayashi harvesting something, scissors in hand. What dish will it become? This, you see, is where the meal begins.

Filled with anticipation, guests step inside the restaurant, which occupies a house decorated in the style of an Italian villa. The floors are wood and the walls are white plaster. Outside the windows, dappled sunlight flickers. In a setting that is neither rural nor urban, the restaurant is a world apart. It is also an epicure’s Mecca. There is only one table, for six. On chef Kobayashi’s ideal day, a pair of diners from the city join a pair from the local area and pair of farmers or artisans around the table, engaging in a conversation that leaves all of them inspired by the time they leave.

The only option for either lunch or dinner is a set omakase menu for ¥19,800 ($150). In Japanese, it is called Wakayama Flavor. Since its opening, Villa Aida has advertised itself as an Italian restaurant, but year by year it has come to fit less neatly in that category. If pressed, chef Kobayashi describes his style as Wakayama flavor. Or better yet, “my cooking.”

The omakase menu includes eight or nine plates, two desserts and a sweet served with tea. In May, the theme was “shoots and peas.” The meal began with an amuse-bouche of chips made from kinuhikari rice grown by the chef’s father and fresh tea buds picked that day. The tea buds, seasoned with a citrus yuzu ponzu sauce made in-house the previous winter, were slightly bitter and green-tasting, but not at all acrid. Their fresh flavor filled my mouth as I chewed. Next was butterbur with caramel and nasturtium. Butterbur, or fuki, is a traditional wild food deeply associated with Japanese as well as Wakayama cuisine, but the pairing with sweet caramel sauce was entirely novel, creating flavors that could only be experienced here.

In another plate, succulent new onions were pickled and served with a compote of lemon blossoms and a third item, daikon radish pods, that is rarely used outside of Villa Aida. Daikon is left in the ground over winter to flower in spring and form the tender young seed pods that are harvested for this dish. Their crunchy texture and bracing flavor, which tastes as green as they look, tied the whole plate together. Next was a plate called Guisante Lagrima Sariette. The larger of these “tear peas” were pureed and the smaller ones were arranged raw in a generous mound of unbelievably sweet orbs bursting with juice. Only freshly picked peas have such delicate, thin skins and vivid flavor. No urban restaurant located far from its suppliers could make a dish like this.

The main dish showcased inobuta, a hybrid of wild boar and domesticated pig, raised in the nearby town of Susami. A pork loin from near the shoulder was prepared sous vide and seared to bring out its flavor, then served with a hummus of flowering baby zucchini from the restaurant’s garden. Dessert featured citrus fruit, a specialty of Wakayama. Even the final sweet was unexpected yet perfectly in tune with its moment in time and locality. Each element of the meal felt like an essential encounter bringing new insight to the meaning of delicious food.

From the unaffected service provided by Kobayashi’s wife, Yumi, to the lineup of natural wines, Villa Aida offers a contemporary take on the appeal of this region. Rustic pleasures and natural bounty are sophisticated, and they have power to reveal the world anew. Few chefs know that better than Kanji Kobayashi.

The restaurant Villa Aida has been unanimously selected as Destination Restaurant of the Year 2022. Its culinary philosophy holds the power to change the values of Japan’s chefs and food producers.

Vegetables comprise 80 percent of the ingredients used by Villa Aida’s owner-chef, Kanji Kobayashi. He and his wife, Yumi Kobayashi, grow nearly all the produce themselves in a 0.7-hectare area that includes the fields immediately surrounding the restaurant and three greenhouses within a few minutes’ walking distance.

Kobayashi said: “For about the first three years after opening the restaurant, I used ingredients imported from Italy and served dishes patterned after the cuisine at the starred restaurants in Italy where I’d trained. At the time I wanted to attract local people and made dishes that were quite ‘fancy,’ but business gradually decreased. I realized I couldn’t keep going that way, and changed my approach. I thought about the restaurants where I’d trained in Italy — restaurants like Don Alfonso, outside Naples. They were all located one or two hours by car or train from urban areas but drew customers from around the world. So I decided to use food products from the Wakayama region and try to attract people from cities. Since I turned my attention to local ingredients and started growing crops to save on storage costs, I made a shift to using lots of vegetables, including herbs.”

These vegetables have uncommonly high sugar content even by international standards, and are very different from the uniformly shaped produce generally distributed in Japan.

“I think many urban restaurants buy directly from growers, specifying vegetables’ size and sometimes even sugar content,” said Kobayashi. “This is good for growers’ business, and it’s certainly one way of thinking, so I won’t say it’s wrong. But after growing produce for about 20 years, I’ve realized that vegetables have different aromas and wonderful flavors at every stage — when they’re not fully mature and still a bit unripe or, on the contrary, when they’re a little overripe, or even when they occasionally grow shoots or flowers. How could I not use them? Currently we grow about 150 types of vegetables, including herbs, but considering that we use them in different stages of growth, there are actually hundreds.”

While his process is simple, the rich flavors of Kobayashi’s cuisine can truly be called nature’s bounty. But things aren’t all on the plus side — agricultural work involves many hardships, too. When a typhoon comes, for instance, the crops can be destroyed.

“You might say we’re able to keep going because our work is so rewarding. How to combine the things that are currently growing in the fields, how to cook them — nature teaches us everything. It always turns out to be something original. I don’t need to rack my brain. There’s the land of Wakayama, the ingredients and the culture — what I’m combining with them is not so much technique as my own experience, including my time in Italy.”

Kobayashi said there was a time when they raised ducks and kept bees themselves and aspired to be completely self-sufficient. But they realized that creating their own self-contained world would keep them from engaging with other people. Since then, they have endeavored to live and work with the local community.

“I also grow blueberries and figs, but for other fruits like citrus and peaches — and things we haven’t had much success in cultivating, like root vegetables — we use other farmers’ products. We also obtain fish, game meat like deer and boar, farm-raised boar-pig hybrid, Kumano beef and other foods from local producers.”

Recently, with the attention his restaurant has garnered, Kobayashi has had more occasions to meet with urban chefs.

“When I introduce chefs from Tokyo and Kansai to producers in this region, I organize get-togethers and invite young local chefs, too. There are young chefs who want to pursue careers in the region but don’t know how to go about it, so I hope to create situations that inspire them to think, ‘This is what I want to do.’ Going forward, I’d also like to travel around different areas, including other countries, and create dishes in collaboration with local restaurants.”

Chef Kobayashi lives with the land, and his culinary philosophy will surely spread to lands across the sea. 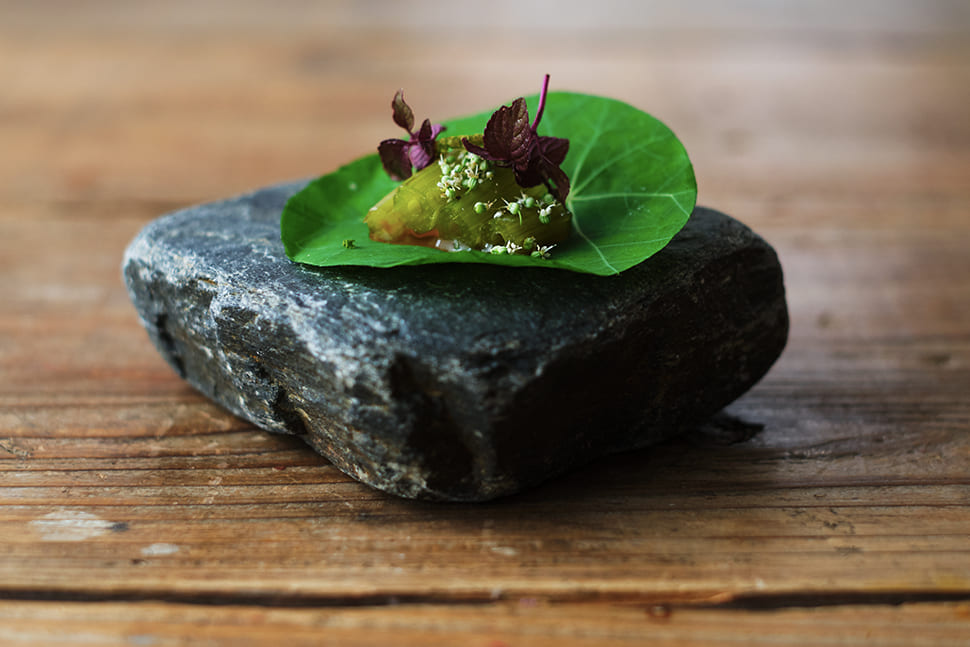 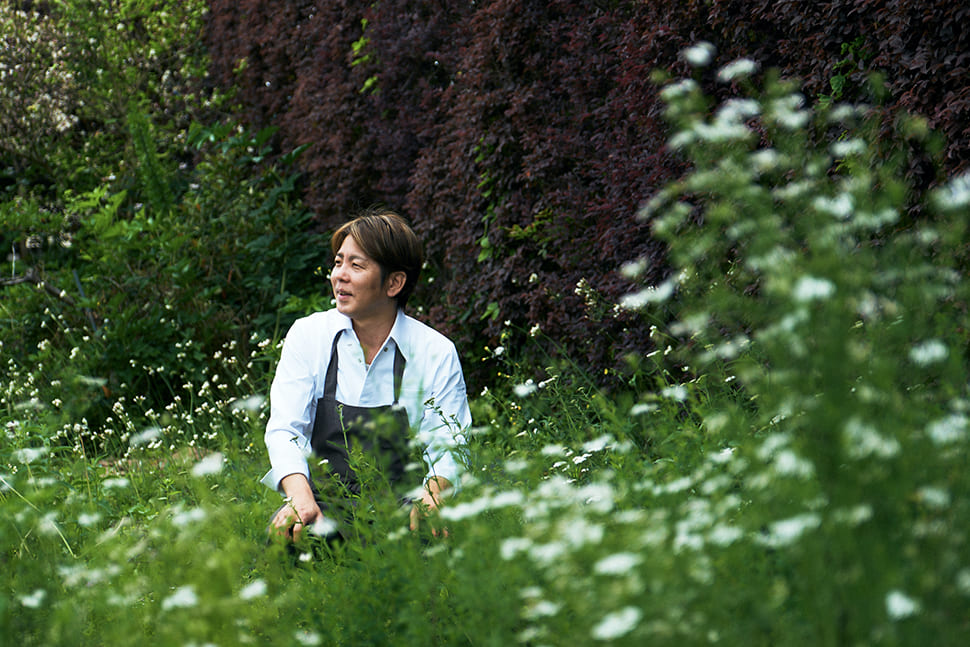